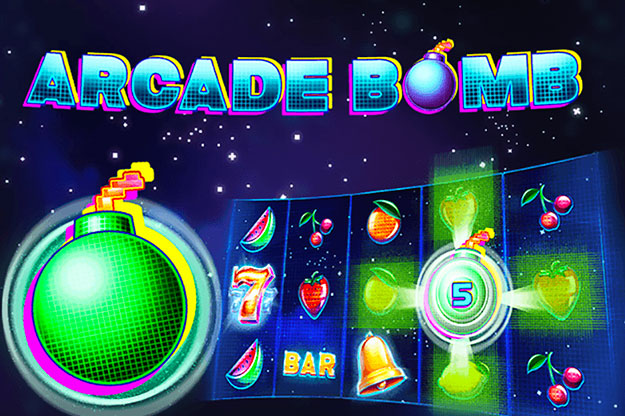 Many players nowadays consider Arcade Bomb a cult classic. This is a 5-reel video slot with 3 rows, and 20 active paylines that was released by Red Tiger Gaming back in 2016. The volatility is in the low area, and the payout percentage is also a nice-enough 96.15%. Now, you might think that this makes it outdated, but we urge you to give it a spin, as you will surely be surprised!

Arcade Bomb is essentially a casino fruit-themed slot, but with an interesting twist for gamblers in New Zealand and Australia. The background, the design, and even the gameplay, are all pretty similar to NetEnt’s massive hit, Starburst. We have the outer space setting, with fruits, sevens, and stars falling down on the reels to form winning combinations.

Arcade Bomb is not just one of those video slots with old fruit symbols, and not much else going on. This game is an interesting experiment from Red Tiger Gaming that combines the classic fruit theme with the futuristic space background present is more modern slot machines. The graphics and animations are also more in sync with modern Casino slots. The same goes for the symbols, which stand out through superior design.

The 20 paylines are fixed, which means that the minimum stake is of 20c, while the maximum one of $500. The classic fruit symbols present in Arcade Bomb are pretty much the same ones that you will find in any other game in this genre in Australian and New Zealand casinos. The Cherries, Lemons, Oranges, Strawberries, and Watermelons are all there, representing the lower-value symbols of the game. Besides these, you also have the top-paying items which are the Bars, the Golden Bells, and the 7s. Those of you lucky enough to land five 7s on a winning line, will cash the game’s top payout, meaning 1000x the value of the stake.

There is only one single bonus feature, namely the Locked Reels Bomb. This is made of several bombs of different colors that land on the reels much more frequently than your average bonus would. Each of them contains a countdown timer, on which you can read the number of spins left until the bomb goes off. All symbols that will get bombed will transform into the closest symbols next to them, leading to some generous payouts in most cases.

Don’t let the year of release and the simplistic configuration fool you! Arcade Bomb is one of those thrilling games that are good enough to compete with modern slots in New Zealand and Australia. The high-quality design is extremely appealing, and there is only one word to sum up the gameplay: explosive!