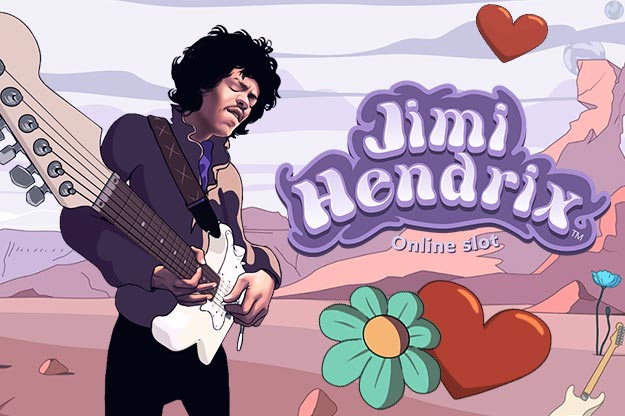 The Jimi Hendrix slot is part of the incredibly popular NetEnt Rocks series of games, along with Guns’n’Roses and Megadeth. The game was released back in 2016 as a homage to the one of the world’s greatest guitar players ever. This is yet another slot that follows the classic setup, with 5 reels, 3 rows, and 20 active paylines. But, the low variance, the high RTP of 96.9%, and the great deal of bonus features and winnings opportunities are what turned it into a major success.

The developers from NetEnt always launch games with extraordinary graphics, and Jimi Hendrix is no exception! From the very first sight, the game stands out, due to a series of animated videos that will transport you to a Jimi Hendrix concert. The whole design of the game is cartoonish, and this helps retain so many elements specific to the 70’s.

As for the symbols present in the game, you will find Hearts, Flowers, Vinyl Records, Peace Signs, Music Notes, and, of course, the Electric Guitar. Naturally, since the game is dedicated to Jimi Hendrix, the soundtrack includes hits like Crosstown Traffic, Little Wing, or Purple Haze. You can’t reduce the number of active paylines, so the minimum bet for a spin is 2c, and the maximum value is $200. The top win is of only 400x, but the game’s payout percentage and low volatility will make it seem much higher.

The Jimi Hendrix pokie also packs several interesting bonus rounds. The two main ones are the Purple Haze and Red Guitar Re-Spin. The Purple Haze bonus creates random Wild symbols when it lands, and the Red Guitar Re-Spin will grant you free additional spins. Also, if you land three or more scatter symbols on the reels 3,4, and 5 simultaneously, you will trigger the Pick and Click feature. There are four different prizes available in this round, so you will have to pick carefully!

The Jimi Hendrix slot machine is a rare gem among online casino games, and it does justice to the legendary artist that inspired it. The unique design, the fitting soundtrack, and the multitude of bonus features and prizes, all blend together perfectly in order to deliver a highly rewarding and electrifying gaming experience.