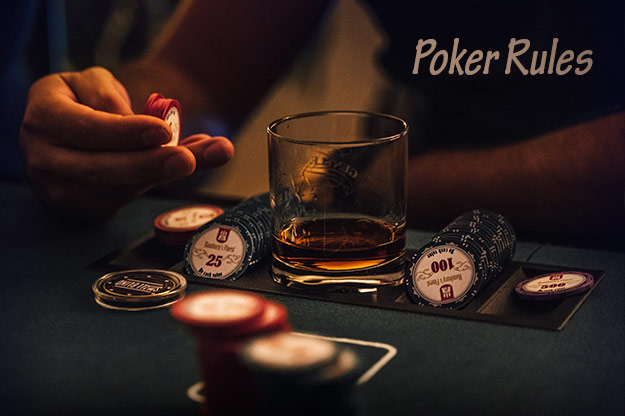 In its essence, Poker is a game of chance. However, skill and mathematics can greatly influence the result of each hand played. All you need to start playing poker is to understand the basic rules. The rules can be quite challenging for a beginner, but don’t let that keep you away from this awesome game. Let’s take a closer look at the very basic poker rules. In this article we will focus on the most popular variant of poker – Texas Hold’em. Texas Hold’em boosts the tile of “Cadillac of Poker” based on its extreme popularity.

To play poker, you will need a standard full pack of 52 cards. The cards have the expected ranking with Ace, King, Queen, and Jack at the top. The Ace also doubles up as the 1 card according to the basic rules of poker. There are four suits equal in value – spades, clubs, hearts, and diamonds. The goal is to create the strongest combination of five cards possible. In Hold’em you will be dealt two cards and there will be five cards drawn on the table. All players can use their two cards and create combinations of five using the community cards. If your dealt cards would make a weaker hand combined with the community cards, then you will be playing solely the community cards. Let’s see what hands are the strongest based on the poker rules basic:

The strongest card combination is the Royal Flush. It is a straight flush composed out of A, K, Q, J, and T of the same flush. The chance of being dealt this specific combination of cards is abysmal at 1 in 2,598,960. The second-strongest combination is the Straight Flush. Any cards that are a straight and flush but are not a Royal Flush. Afterwards, getting four of the same cards results in Four of a Kind. Having three of one card and two of a different card results in a Full House. Flush and Straight are the next strongest cards. At the bottom of the ranking, we can find Three of a Kind, Two Pair, and a simple pair. If you do not have a pair then the highest card in your dealt cards or community cards will play. According to basic rules poker if your dealt cards are lower than all 5 community cards, then you will be solely playing the community cards.

Blinds are set amounts of chips that a player has to put on the table before they get to see their cards. There is a big blind – let’s say 400 chips- and a small blind that is half the big blind. In tournament settings, there is usually an ante as well. Depending on the number of players at the table the ante usually adds up to another big blind. This means that before the hand has even started, there are 2.5 blinds up for grabs. The addition of blinds and antes makes engaging poker because there’s always some money to be won.

Depending on the variant of the game, you could bet all your chips at once if you feel like you have a very strong hand and want the other players to pay you. As for Limit Hold’em, usually the variant called Pot-Limit is played. This means that the most you can bet at any point are equal to the amount that has been bet so far in the hand. You can place a bet lower than the current pot, but you cannot go over it.

Once you have learned the hand strength and figured out how to combine your dealt hand with the community cards, you are well on your way to playing poker. For beginners, we suggest playing Pot-Limit Hold’em because it allows you to play more hands without facing the risk of losing all your chips. Armed with the basic rules of poker for beginners, you should be right at home playing Poker. Best of luck at the tables!